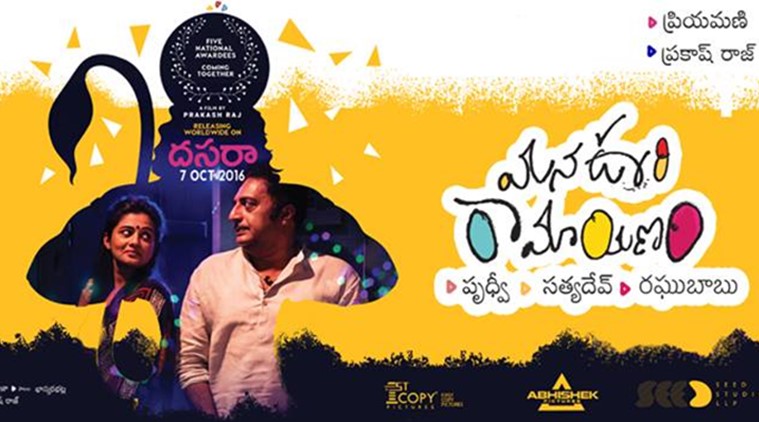 Few minutes into Mana Oori Ramayanam, you know it’s not a regular telugu cinema. There’s no heavy background score underlining every emotion, no physics defining action sequences, no item numbers and above all – no hero worshipping.

Bhujangayya (Prakash Raj), a big head in a village wants his 19-year old daughter to get married though she wants to study further. He has a brother-like assistant Siva (Satya Dev) who’s an auto-driver. Comedian Prudhvi who plays a film-director accidentally forgets his script in Siva’s auto. That same day, Bhujangayya meets a prostitute (Priyamani).  They get locked up in a room together and the bag with script in it. Siva tries to get back the bag but unfortunately gets stuck in the police station along with Prudhvi for the entire night. The remaining film revolves around Siva and Prudhvi’s attempt to save Bhujangayya’s reputation and get the bag.

Prakash Raj – This man’s dedication towards cinema is unmatchable. Writing, acting, directing, producing – These are just the official credits but I’m sure he did everything possible to make this film stand high. The best thing about Prakash’s acting in this film is that it’s not his dialogues but small nuances he gives that leaves a mark for a long time. Priyamani is pitch-perfect for her role and she yet again proves why she’s a national-award winning actress. Satya Dev who plays the auto driver is the new discovery through this film. Though he appeared in a couple of films before this, he gets a meaty role here and he just grabs it and did it with perfection. He has a long way to go in this industry. Prudhvi gets an important role. Special mention to the grandmother who’s just adorable and quirky. In places, she’s really funny.

Mana Oori Ramayanam is incomplete without Maestro Ilayaraja. He gave us an instant classic with the title track. I’ve never heard a 3-minute song which beautifully summarized the entire 110-minute film. Kudos to Bhaskara Bhatla. As it happens with every good film, the technical team is good here as well. The festive mood of the village is beautifully captured so are the indoor sequences.

Mana Oori Ramayanam can termed as a “comedy thriller” with a simple story. It doesn’t teach you big things. But it’ll make you think about life in a different way. One best thing about this film is that – it never rushes on you. It lets you breathe to enjoy the small nuances. The silences are very powerful in the sense that they are not spoon-feeding the emotion to us but lets us enjoy the moment and think about it. The characters have many metaphors from Ramayan characters like Ram, Hanuman etc. With a brisk 110-minute run-time, the film takes us through a small journey of life and makes us feel to want more in the end. Though the story is a bit adultery, Prakash never brings obscenity to the picture. That’s a great effort and he should be appreciated for all his efforts to put together this film beautifully.

Every man has a Ram/Raavan inside him. Similarly every woman has a Sita/Surpanakha. The war between the good and evil inside us, what we’re inside actually and what we’re projecting to the world – this is life and this is “Mana Oori Ramayanam”.

Is this movie worth your money? I don’t know. Can we expect a telugu movie like this in near future? I highly doubt that.