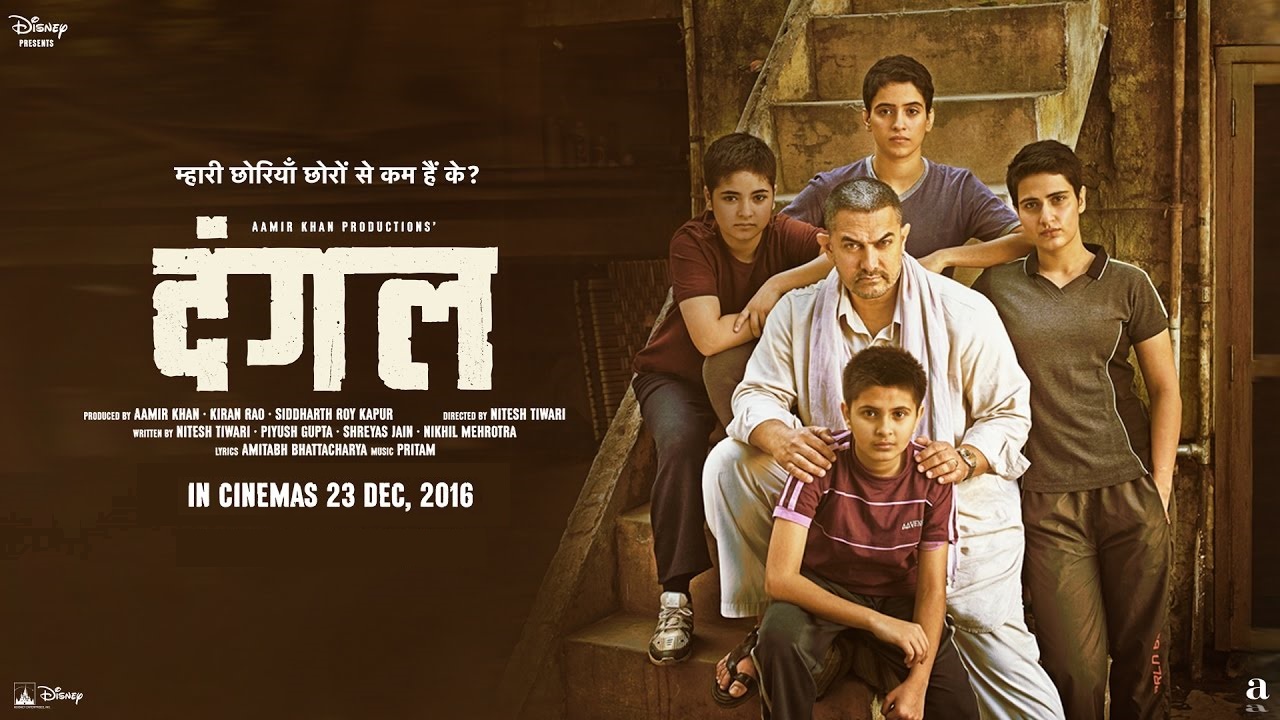 How can I categorize Dangal? Calling it just a sports drama is plain stupid because it’s much more. If not Dangal, “India’s Daughters” would’ve been a perfect choice for the title because these are our inspiring daughters who we need to know.

Mahavir Singh Phogat(Aamir) is a national wrestling champion who had to quit the sport. He wants a son badly so that his son could achieve what he couldn’t – Getting a medal for India. Unfortunately, his wife(Sakshi Tanwar) delivers four girls. Mahavir gets disappointed and decides to let go of his dream. But to his surprise, he finds his daughters thrashing a guy badly and then realises “Gold is gold. It doesn’t matter who brings it – a girl or boy”. He trains Geetha & Babitha rigorously. Geetha becomes national champion and goes away from her father to National Sports Academy for further training. How did that lead to Geetha’s performance & her equation with Mahavir? Did she fulfill her father’s dream?

The story is pretty much evident from the trailer. You’ll know what’s gonna happen in the end, still you can’t help but cheer with tears of joy. That’s where the strength of Dangal lies. It’s this sheer joy of winning that makes the film thoroughly entertaining. The perfect mix of right amounts of comedy, father-daughter relationship and the adrenaline rush of the wrestling matches makes Dangal a blockbuster material. This balance of narrating a meaningful story with engaging wider audience is something that Aamir nurtured which has grown over the years. The four writers including the director Nitesh Tiwari must be given the credit for such solid writing. Barring very few lags in second half & a bit unconvincing twist in the end, the writing is consistent throughout. Given the targeted wide audience, it’s understandable to underline few emotions and particularly having a voice over for the game because we don’t know the rules exactly.

Coming to the performances, I’ll talk about the girls first because they’re the heart of Dangal. Be it the two child actors or Fathima & Sanya who played Geetha & Babitha, all the four are exceptional in their parts. Especially Zaira & Fathima who played little & young Geetha respectively. From desperately wanting to get rid of wrestling from their “Haanikaarak Bapu” to fighting their guts out to fulfill his dream, their journey is truly inspiring. It’s these girls & their relationship with Mahavir that makes Dangal much more than a sports drama.

Nothing written about Dangal will be complete without mentioning this man, Aamir Khan! His name will be written in the history of Indian cinema as one of the major pioneers who took chances to push the boundaries and changed the game every time. Like many of his films, you’ll never see Aamir-the star but Aamir, the actor who has the guts to look old & fat throughout a 2 hr 40 minute major motion picture and still convince a large audience. He’s damn perfect as the “Haanikaarak bapu” who’s tough when it comes to training his daughters for wrestling but affectionate at the same time who presses their swollen legs in the night. He gives an award deserving performance. Special mention to the equally brilliant supporting cast – Sakshi Tanwar who’s apt as Mrs. Phogat & the guy who played Geetha-Babitha’s cousin who provides the much needed humor to keep the film lively and entertaining.

Girls like Geetha and Babitha are the “India’s daughters” folks! There’re many more of them out there who needs to be empowered not just in Haryana but in many parts of the country. Given the true events including the people who inspired Dangal & coming from a huge star, the message will reach to a larger extent for sure.

On a final note, Dangal is a huge leap for hindi cinema. Go watch it.

But for god’s sake, please don’t call it a “Bollywood” film. It’s high time we stop using that word. We’ve suffered enough. Give the films the credit they deserve instead of crediting every good film in India to “Bollywood”. Dangal is an Indian film which has its values deeply rooted in heartland of this country.

I’m going with four stars. (If not for the coach character, Dangal easily deserves four and half).