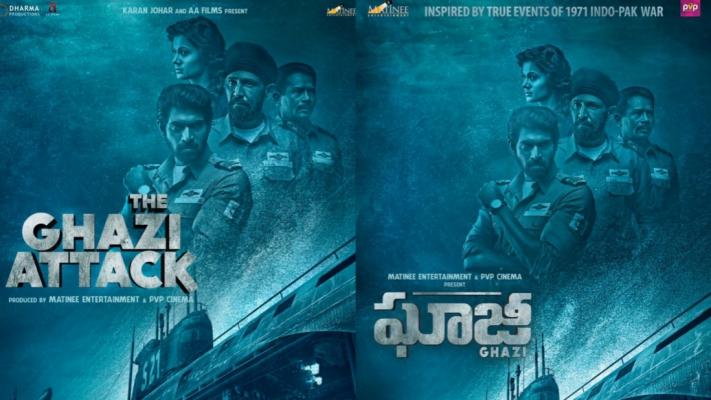 In times of forced/fake nationalism, Ghazi defines what real patriotism is and who our real heroes are. Not all of them are at the border, some are under the sea fighting for us.

The story starts with Megastar’s voiceover which gives the back story for the events happened in 1971 followed by intelligence reports that Pakistan may attack on one of the eastern coast ports. So, submarine S-21 is sent to the sea to observe any activities happening with Arjun Verma (Rana) as Lt. Commander, Captain Ranvijay Singh (Kay Kay Menon), Executive officer Devaraj (Atul Kulkarni). The rest of the story is completely the events happened in the submarine and how they ultimately destroyed PNS Ghazi, one of the most decorated submarines of Pakistan Navy near Vishakapatnam. Every Vizag guy must have seen the submarine near the beach museum. But I’m sure most of them had no clue of its history.

Coming to the performances, when a film has legendary actors like Om Puri, Kay Kay Menon and Atul Kulkarni with a brilliant script, you can see the level of intensity in their performances on screen. Rana also adds so much to the film with his stature and his diction. As the film progresses, he gets into the character and owns it by the end delivering an amazing inspirational speech to his fellow mates. Satya Dev plays the role of sonar operator. It’s tough to act to nothing but the headphones on and hold it for sometime flat. He managed to pull it off well. Taapsee gets a very limited role and that character is the only thing which was forced in the script.

There are two departments in which Ghazi gets it all right. First, the detailed production design (the set of Submarine). The submarine never felt like a set. You can see the crew operating many things and nothing looks or feels fake. That’s an award deserving effort. Second, the brilliant cinematography by Madhie. The lighting is top notch. The raw and real emotions are captured beautifully. A very special mention to the costumes department for their detailing and VFX team for taking Ghazi to next level with their decent work.

Now comes the captain of this ship, Sankalp Reddy. It’s amazing to see such an young man dreaming big and having guts to tell this story as his first film. There’s rarely any amateurish take in any scene. To shoot major portion of a 123 minute feature film in a submarine is no joke but he made sure that the screenplay is tight and gripping staying absolutely true to the script without any added distractions. He is one talent to really look forward to in the telugu industry. Producer pvp should be appreciated for believing in Sankalp and putting money into this ambitious project.

I am strongly against any form of forced nationalism like playing national anthem in theatres. But by the end of Ghazi, when the soldiers started singing the anthem, it didn’t feel forced or over dramatic. But I feel it can be avoided in the screenplay. Also, the torpedos sequence felt repetitive and stretched. But that’s a small thing which can be easily ignored given that the screenplay is gripping.

If you’re a telugu cinema fan, Don’t miss Ghazi. If you are not or if you don’t like the kind of movies produced here, I’d highly recommend you to watch it to see the other side of the coin which is telugu film industry. Trust me. You’ll love this side.

I’m going with 3 and half stars.